Both for the rapid accelerator and the target code generation some specials are necessary. Because: The DataStruct…​Inspc SFBlocks contains parametrized data, which should be presented by generated struct with its access routines.

There are two important things:

The last directory of this path have to be genSrcInspc like shown here. This directory is used in the generated source in the include statement, see below. 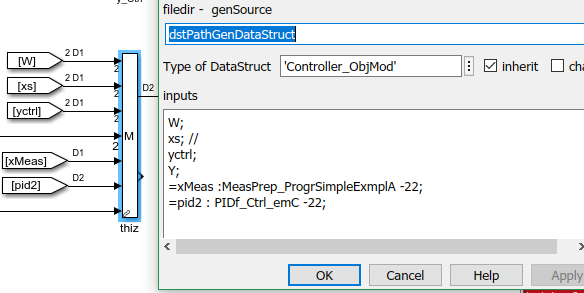 The struct is based on ObjectJc which is necessary for ObjectOrientation for type check and for reflection access (Inspector). In a poor target software constellation this base structure can be reduced to 1 ` int32` variable for an ident number and the index of the type. This is enough for the Inspector-Target-Proxy concept (see [[InspcTargetProxy]) or for low level debug.

The data names come from the parameter, see image above. The types of the first 4 inputs come from the connected input signals from the model. The access rights are for the Inspector access via Reflection generation.

The two last elements in this struct comes from inputs with given type, which are handle in the model. In the struct for target code generation the type qualified memory addresses of the handles are stored. The access level is written in comment, because it is used for the generation of the reflection files for the Inspector access.

The headerfile contains also the prototype for the constructor and prototypes for the DataStructMng_Inspc S-function and the forward declaration for the reflection type:

Because the code generation for the target system cannot distinguish on this position between arrays or scalar, it uses always the reference to the input or output variable. Using ` memcpy` with the known array size in the structure is always fast, because ` memcpy` is usual optimized by the compiler for the fastest possible access.

Getter and setter routines for all Access…​Inspc S-Functions are generated till now (2021-03), but not used yet. The reason is: More flexibility in access, hence a direct access to the data is generated by the coder. The getter and setter should be enhanced with selection of array elements. This may be done still in future. But on the other hand the generated code is more simple with immediately access.

From another example header ParameterOptimizer_ObjMod.h:

The get_par_…​(…​) is the access with the right shown FBlock: The type in the model and in the generated source is uint32, a handle. The meaning of the data is a reference (address, pointer value). In the struct the exact typed reference is stored how it is given in the appropriate DataStructInspc definition block where the type of the handle/reference is parametrized. The access converts the address value in the struct to the handle value. For a 32-bit target system it is an empty macro, only a type casting.

This is the appropriate InitDataStruct_Inspc FBlock, which’s parameter defines the type. The type is tested in the Simulink run mode by reflection check, used for code generation and used in the target software. The variable of the code generated code are of type uint32. The HANDLE_Handle2Ptr is a simple macro which contains only a type cast if the target system has 32-bit-addresses. The address is stored immediately in the uint32 variable of the model. On low-level-debugging (single step) in the target code the correct type can be evaluated for showing the content in the debugger from the struct variable, that is explicit helpfull. The type is used for Inspector access on the target too. The reflection generation is done from this generated header file.

The generated code for the right FBlock is shown above. It is adequate the get routine. direction is reverse. For vector assignments a memcpy is used too.

The special provocation for the set FBlocks is: The associated DataStruct_Inspc FBlock must not set this value in any step time, only in the Tinit time as initial value. This is done via the 100 value of access rights in the parameter dialog. The 107 means additionally read only access.

Some manually adapted tlc files are contained in …​/lib/+mkSfn/tlc_src/[xx].tlc and copied from there with the mex compilation to the adequate mex/tlc_c directory. The automatic generated tlc files (see [[Topic:.Smlk_de.C_ObjO.genSfH.]) are stored as …​/lib/+genSfn/Inspc/[xx].tlc

2.1. Initialization of the DataStructMng_Inspc in generated code

This is the initializing (start-) operation for the code generation both for target and accelerator. The tlc generation (Mathworks-specific) use this as template. %<NAME> are outputted from the content of a NAME, comming from parameter or from model properties. To set the parameter the operation mdlRTW(…​) is a S-Function wrapper is essential. All %<SFcnParamSettings…​> comes from there.

Generally there are two update operations (same for output) in the tlc file. The Update(…​) will be executed for code generation if only one step routine should be generated. It depends on the settings on the code generator. The rapid accelerator may be set other than the target coder.

If more as one step routines are generated, the code generation uses the UpdateForTID(…​) routine. The %if tid == …​ is not generated in code, it is to control the code generation itself. It means, only the parts after %if till %else or %endif take place in the generated code. Other than in Update(…​) where the if(…​) is part of code (written without % before %if

The %<doUpdateTinit(block, system)> is a sub routine call for execution of code generation, not generated in the code. This tlc-sub-routine contains (shortened):

Here the init_…​(…​) routine from the adequate data struct is called. If this routine returns false, clrInitDone() is called on the generated code. This routine is global, resets an initDone variable and forces repeating initialization. It is exactly that behaviour which is described in core modules in target language, chapter Initialization of aggregations.

Adequate it is for the set_DatatStructMng_Inspc_SfH.tlc:

This code generation rule generates the ,,set_…​,, routine for the generated ,,struct,, of the DataStructMng_Inspc-FBlock. It does not support yet (2021-03) the access to elements if a vector is given, it does not support a given ,,(StructType),,. It means the ,,StructType,, is always gotten from the connected FBlock in input. This can be enhanced in future. Yet it is a small restriction to the model.

It is TODO yet. It is tested yet only without code generation on some examples.